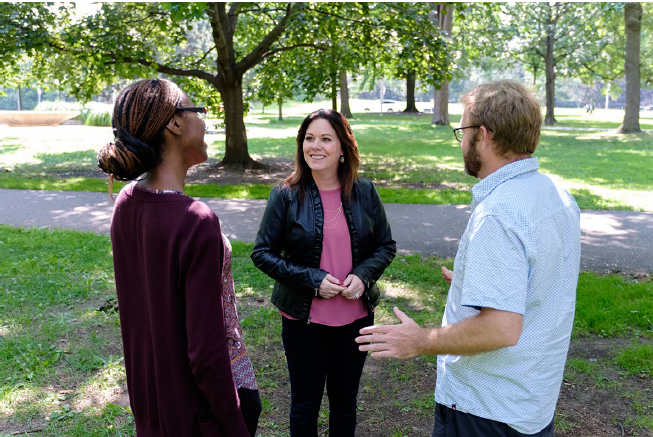 Lisa Gretzky was elected as the Member of Provincial Parliament for Windsor West in 2014 and 2018, and currently serves as the Ontario NDP Critic for Mental Health and Addictions.

A dedicated community advocate, Lisa is a long time defender and champion of public education. She is committed to fighting for a living wage, pay equity and social programs that truly support people and lift them out of poverty.

She was elected twice as a School Board Trustee for the Greater Essex County Board, served over 36,000 students and helped to manage a budget of $290 million. Before her election to the Ontario Legislature Lisa held the position of vice-chair of the Greater Essex County District School Board and worked as a small business owner of a special event and wedding planning business.

Lisa formerly served as the Ontario NDP Critic for Community and Social Services. Before that she served as the Ontario NDP Critic for Community Safety and Correctional Services, and was later appointed Critic for Education. During her tenure as Education Critic, Lisa routinely called for the government to provide quality in classroom supports and greater access to special education funding and supports. During the last term of the previous government she lead the successful fight, alongside students, parents and education workers, to save Provincial schools for the Deaf and hard of hearing as well as Demonstration schools for children with severe learning disabilities.

In her previous role as Critic for Community and Social Services Lisa consistently fought against government cuts to social services, particularly supports for people with developmental disabilities. Her private member’s bill, Noah and Gregory’s Law, had passed second reading and if it was implemented, would bridge the gap between youth and adult supports for people with a developmental disability.

A hard-working community leader, Lisa Gretzky works to ensure that the most vulnerable members of our communities – whether that be children, those with disabilities, or low-income Ontarians – are included and supported in our society.

She and her husband, Tyler, live in Windsor with their two children and granddaughter.

Stay in the loop Issues About