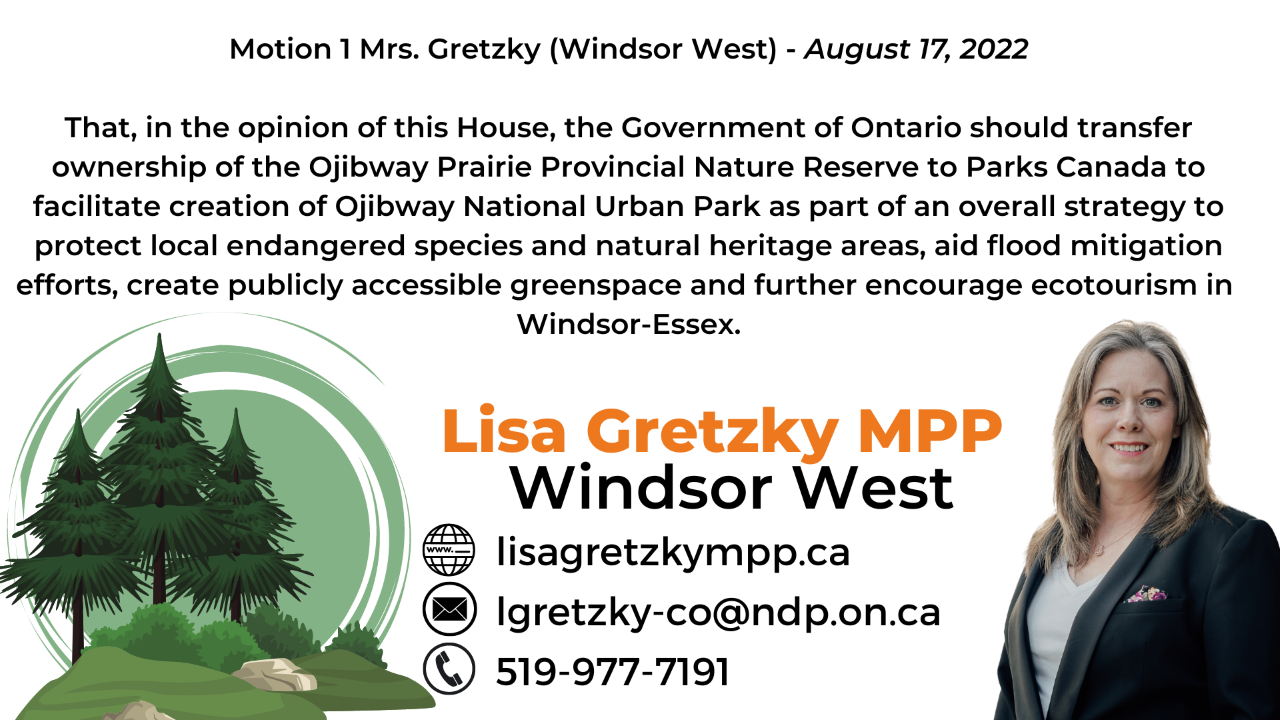 
Want to support Motion 1? Send the letter below to the Minister of  Environment, Conservation and Parks as well as local MPPs

In August 2022, Lisa Gretzky MPP Windsor West tabled Motion 1 – a motion that asks the House to transfer the Ojibway Prairie Provincial Nature Reserve to Parks Canada to help establish the Ojibway National Urban Park in Windsor, Ontario. I am asking you to support this motion when it comes before the House.

The proposed Ojibway National Urban Park would include Ojibway Park, Spring Garden Natural Area, Black Oak Heritage Park, the Tallgrass Prairie Park, Ojibway Prairie Provincial Nature Reserve, and Ojibway Shores, a vital 33-acre greenspace and the last remaining, undeveloped natural shoreline in Windsor-Detroit. It is home to hundreds of endangered species that rely on migration through surrounding local parks for survival. It serves not only as a home and larger ecosystem to many species, including those that are identified as endangered, but also provides mitigation of flooding due to climate change and natural heritage areas that our community and travellers from far and wide can enjoy, appreciate, and use for healthy living space and ecotourism.

The Ojibway National Urban Park has been supported by all levels of government, local Indigenous communities and environmental groups. It is critical that MPP Gretzky’s Motion-1 passes to ensure the final piece is completed -- the province finalizing their discussions to transfer the provincial land to Parks Canada. It is worth noting, all federal Conservative Members of Parliament voted in favour of Bill C-248(An act to amend Parks Canada to include the Ojibway Urban National Park) in the House of Commons.

I urge you to vote in favour of Motion 1 when it is brought forward in the Legislature.

Stay in the loop Issues About